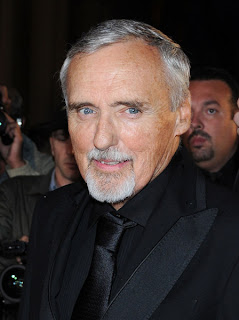 Dennis Hopper
1936-2010
I don’t mean to return to this blog on a sad note after a little Da Morgue vacation (went to Sasquatch Music Festival, there will be a podcast on it soon.) but with the passing of such a legendary performer I had to write some kind of tribute.

For the most part this was something that was a long time coming. Hopper had been diagnosed with advanced prostate cancer last october and had clearly been in failing health in recent appearances. Fortunately he did manage to attend and speak at his own induction into the Hollywood Walk of Fame last March and seemed to have been in high spirits despite his illness.

Always a controversial figure for his notorious drug use and anger issues, it will be Dennis Hopper’s impressive body of work that will entertain audiences now and to come. From his early roles in James Dean movies. to his time as an icon of the Woodstock generation, to his comeback in the 80s, Hopper led a diverse and unique filmography behind.

P.S. In his memory I plan on doing a top ten list of his best roles. Though I’m gonna take my time on this one so it should be out in a week or two. 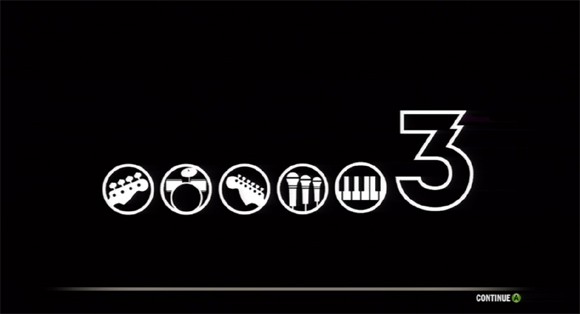 That image above pops up at the end of the Green Day: Rock Band demo. Look at that, it’s the four ways of playing Rock Band we’re all pretty familiar with. Oh, and what’s that? Keyboards, right? That’s exciting. Not sure how that’s going to work, but everyone’s been saying that Rock Band 3 will be more about actually learning to play instruments, so maybe that’s a factor of the new direction.

But wait! Ars Technica is reporting that graphic is actually for the new game’s keytar. Well, that’s interesting. Um… I don’t get it. Wouldn’t the game version of a keytar be pretty much identical to the game version of a guitar? Are we just going to get to play piano parts with our guitars now? Does this mean every song in the game has piano in it? Probably not, we know the game supports vocal harmonies now too, but I doubt every song will have multiple parts to sing. But still, what’s the big idea here?

Ars Technica also says there’s going to a “pro” mode that could possibly teach you how to play guitar/bass. How will that work, I wonder. I like the idea of the teaching part of the game being a separate mode, since I imagine most people just want to have fun and don’t really have musical aspirations. Plus I generally play with three real musicians and this new mode would probably make me look really bad by comparison.

But yeah, I’m starting to get really excited about Rock Band 3. Harmonix is doing a good job of giving me the impression that they are actually doing something new and exciting instead of just cashing in on a beloved franchise. I guess we’ll find out more at E3. 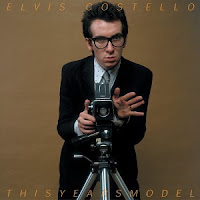 Or would you call this a new wave record? Elvis almost seemed to blur genre’s seeing how different his sound was from other artists of the time, yet reminiscent of the past. I remember how my dad used to say how much he hated most music in the late 70s but that it would of been a lot worse if it wasn’t for Elvis Costello. Elvis was simply in a league of his own when it came to pure pop rock prowess with an amazing songwriting mentality. Catchy tunes, solid musicianship, all tied together with a voice that I don’t even know how to describe. It’s as Will Ferrell might say “Scrumtrulescent.”

Picking a favorite track here is damn well impossible as it’s all overflowing with hooky pop goodness. More than anything it’s about the whole experience, showcasing Elvis Costello’s songwriting ability. Obviously “Pump it Up” and “Radio Radio” (which is only on the U.S. version) are some of Elvis’ most celebrated hits but any one of these songs has the same kind of potential.

My favorite compliment I ever received while playing in The Defenestrators was being told once that I sounded like Elvis Costello. Not to divert the attention to myself or put myself even remotely close to the league of a genius like Elvis but who has a cooler voice than Elvis Costello? I only wish that compliment was true, no one quite has the same kind of swagger and style like him. 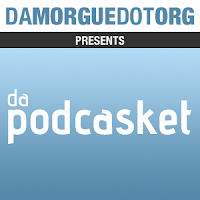 They’re back again, complaining about the same ol’ crap they usually do. Take the Mariners, for example. Do you imagine the gang are happy about their team’s performance lately? Then maybe you are a fool.

Sean also talks about Lost and 24, but no one cares. Then, in a shocking twist, video games are actually discussed. Huzzah!

What more could a single episode contain? A lot, actually. But it’s up to you to listen and find out. Or not. After all, whose cares what these guys have to say? 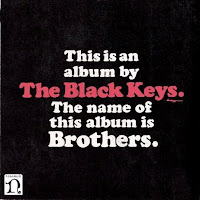 My interest in Blues Rock duo The Black Keys is fairly new. Like many I assume, I became intrigued after hearing their 2006 single “Your Touch” in TV and movies like Eastbound and Down and Zombieland. I’ll admit I was hesitant about devoting my time to yet another bare bones guitar/drum combo but I gave em a try a while back and still haven’t looked back.

Akron, Ohio’s The Black Keys for the most part specialize in Southern Blues Rock but haven’t pigeonholed themselves strictly within that genre. For they’ll just as easy switch over to a more mainstream rock or even R&B or soul sound on any given track, they even cover Isaac Hayes! That’s one of the key aspects that makes Brothers such a bluesy good time, they always keep ya guessing

Despite being a guitar/drum duo The Black Keys don’t mind throwing in bass on just about every track and plenty of keyboard and organ. They maintain a basic approach but it’s the subtleties of the production, Dan Auerbach’s guitar work and Patrick Carney’s drums that keep it rockin’ and never boring. Got to give props to co-producer Danger Mouse as well, he sure gets around huh?

With the release of Brothers I finally declare myself a Black Keys fan. It’s a unique piece of rock with no shortage of throwbacks to rock and roll of yesteryear. The only real problem is it’s a little long but without a weak track in sight. So if you like crunchy riffs, tight jams and howlin’ vocals check out Brothers and let loose.

Favorite Tracks: “Everlasting Light”, “The Only One”, “Tighten Up” 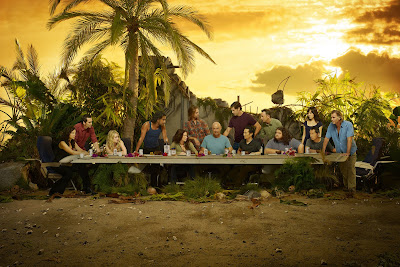 And that’s it. Lost‘s finale has aired and the saga of the survivors, others and every one else is complete. Of course the show went out big. The episode was two and a half hours long. It put the fate of the island and everyone that was ever touched by it on the line. But was it a satisfying end to one of the most significant television series in recent memory?

Yes and no. It hasn’t had much time to sink in yet, but I feel a lot like I did when Battlestar Galactica ended a year ago (yes, I am namedropping arguably the two nerdiest shows of the last decade). A major theme of both series were the conflict between science and faith, and both erred on the side of the latter in the end. But with Lost, and all its twists and turns, it makes a lot more sense.

Emotionally, this episode was definitely a success. The plot played out pretty much like a movie (especially thanks to its feature length) with Jack and his crew facing off with the Man in Black once and for all. Meanwhile, in the flash sideways universe (if we’re still calling it that) all our heroes start finding each other and remembering their history together. It all builds to a surprising last half hour and a beautiful last shot. I’d call that perfect.

But there is the issue of all the unanswered questions the show leaves. We didn’t get too much new info from the finale, however I would argue the ending was good enough that I didn’t really care about most of my remaining confusion. The only thing that really bothered me was the light, and corking that light, and why Desmond was the guy for that job. Maybe I’m just missing something there. But that probably could have been done better.

What was the point of the numbers? Why weren’t Michael and Walt in the church? The episode succeeds without answering this question, but it is indeed nagging me. I have to think the answer is because Walt is too grown up now, but wouldn’t age not matter in the sideways universe? Did Jack just really not like them? It seemed weird to feature Vincent so heavily but not even mention special ol’ Walty boy.

But I don’t get to ask these questions anymore. I hardly got to, after only catching up with the show earlier this year. I might have had a different experience with Lost if I hadn’t come in as late as I had. The show took a real turn from people surviving on a strange island to something really different, and I could imagine a lot of the bigger twists along the way could have turned viewers off. But as someone who came in looking forward to seeing the craziness that I heard only Lost could deliver, I was not disappointed.

After six years of polar bears, smoke monsters, pressing buttons to save the world, and atom bomb time travel, Lost is done. The show built itself a crazy mythology and a huge fanbase obsessed with figuring it all out. In the end, they didn’t give all the answers. But they gave enough.

P.S. Jack got to jump punch the Man in Black. This precedent is set. If you’re named Jack and in a TV show, you must jump punch someone at some point.

This will probably be covered somewhere else tonight, but this really stuck out to me. I’m not really sure where I stand on the whole umpire vs. robots argument, but after tonight I can say the robots are making quite a compelling case.

Heath Bell threw 4 straight fastballs, all of them out of the strike zone. The second, third, and fourth pitch were all in pretty much the exact same area. But instead of being ball four, it was strike one. Then Bradley had to try to hit two high fastballs which nobody really has a chance to hit.

If Bradley would have walked, we would have had the the bases loaded and one out. Our WE then would have been .556, again meaning we had a 55% chance of winning the game. And while that 8% isn’t mind blowing, it’s better than what it was.

I know that Kotchman’s ground ball would have been a double play and the game would have been over, but I’ll take my chances with bases loaded and one out over what we had.