An interesting thing happened with the Oscars in the 1990s: they started giving the big awards to popular movies. Forrest Gump won Best Picture. Titanic won Best Picture. For as snooty and out-of-touch the Academy has a reputation for being, there was a stretch there were being the biggest movie of the year also meant you had a legit shot at Best Picture. That trends goes at least as far as the 73rd Academy Awards, which gave the top prize to Gladiator, the third highest grossing film of 2000 (behind How the Grinch Stole Christmas and Mission: Impossible II). Now, I love me some Gladiator, but is it truly superior to Steven Soderbergh’s one-two punch of Erin Brockovich and Traffic? And beyond that, did the Academy pick exactly the wrong time to go mainstream? 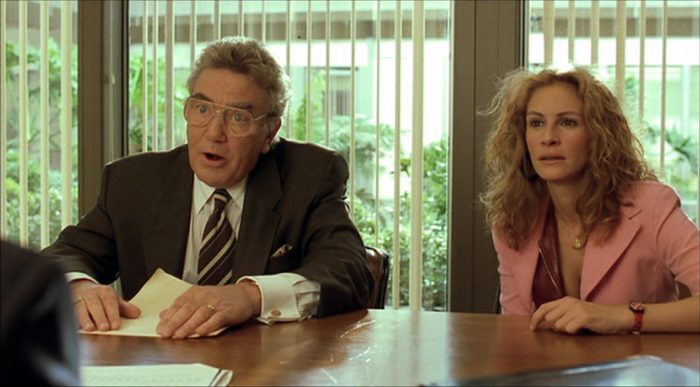 Making movies is hard for many reasons, most of which stem from the fact that cinema is a delicate balancing act between art and business. Looking at the history of the medium through a very fuzzy lens, you can see that the balance usually is in favor of the money men, but every once in a while shifts to the creatives. It happened in the early thirties, in that narrow window between the proliferation of sound and the oppressive implementation of the Hays Code. It happened in the late sixties, when the “New Hollywood” shattered the studio system. And it happened in the nineties, when video suddenly made it a lot cheaper to make movies and a bunch of new voices sprung at the chance to become “indie” filmmakers.

At the forefront of this wave were a bunch of white dudes; guys like Jim Jarmusch, Richard Linklater, Quentin Tarantino, and Gus Van Sant; who would all find enormous success, but none of them were as adeptly capable of taking on the shifting status quo as Steven Soderbergh. Soderbergh found his niche taking an arthouse approach to familiar Hollywood archetypes. He is so good at it, he took on the famous “one for them, one for me” approach, alternating between crowd-pleasing and risky pictures for decades. So Out of Sight was followed by The Limey, Ocean’s Eleven by Full Frontal, and Logan Lucky by Unsane. But his biggest year was 2000, when he went after two of Hollywood’s most beloved genres: the biopic (Erin Brockovich) and the crime drama (Traffic). And this is ostensibly an Erin Brockovich review so let’s dig into that one a bit.

Erin Brockovich is delightful. It tells the story of a single mother of three (Julia Roberts) who finds herself in a desperate situation after she loses a lawsuit her lawyer (Albert Finney) assured her she would win. To make up for it, she demands a job at his firm and by chance starts investigating a real estate case between a family and the utility company PG&E. Through some rigorous detective work, Brockovich discovers PG&E has been dumping carcinogens into the groundwater of a small town for decades, causing not just this one family but hundreds of people to become terribly ill. What’s worse, the company is trying to quietly buy up the land and pay off the people it hurt so that the statute of limitations will expire and the families lose their ability to sue PG&E. So, despite having no legal training, Brockovich ends up spearheading what will become one of the biggest class action lawsuits in American history.

I don’t know if you can call it a sub-genre, but I love movies that are just about people who are really good at their jobs. Even something as forgettable as Sully chokes me up just because I like how well those pilots and ferry captains do their work. I like it so much I actually got kind of frustrated whenever this movie made time for its B story about Erin’s relationship with her biker neighbor (Aaron “The Core” Eckhart). But that stuff is also necessary to help put together the complete Oscar bait package for Julia Roberts, who gets to play: someone down on her luck, who’s also a caring mother, and a former beauty queen, who’s a strong independent woman who doesn’t need no man, but also the plucky new person in the office who doesn’t fit in, because she’s a pretty lady who is actually tough and swears a lot, and a savant with a photographic memory. It’s no wonder Roberts is earned Oscar gold for this part.

Soderbergh did well that night too, although he was running with another crew. Traffic won four of the five Oscars it was nominated for, including Best Director. But the night belonged to Gladiator, which took home five Oscars, including Best Actor and Best Picture. When I started writing this, I really wanted to make the case that Erin Brockovich should have won and helped legitimize everything that had happened in the previous decade, but the truth is I actually kind of feel bad that Ridley Scott never won Best Director. Plus, Soderbergh won a shitload of awards between his two movies. And I can’t even make argument that more indie movies should have been nominated, because 2000 was a pretty shit year for movies. So maybe the 2001 Oscars were fine?

Would it have been cool for the Oscars to go super indie in the nineties? Yes. Was there even a chance of that happening? No. Maybe the trend I saw wasn’t the Oscars going mainstream, but just a weird decade between two eras dominated by franchise filmmaking. If you look at the list of the worldwide highest grossing films of the 1990s, you’ll notice there are more non-franchise movies there than in either the 1980s or the 2000s… Especially the 2000s, where all the top 25 are franchise films except number one, James Cameron’s Avatar. My best explanation is that in the 1990s, instead of a recognizable property, the big movies came in familiar formulas: action movies with terrorists, epic disaster movies, tragic romances, bombastic comedies. And Oscar was cool with that. The question I’m left to ponder is: was that better?