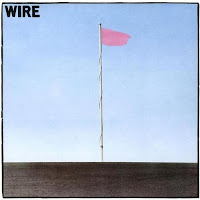 By 1977, the punk zeitgeist was reaching it’s peak as The Clash’s debut infiltrated the top 20 of the UK album charts, while The Sex Pistols’ debut went to number 1.  Now I was considering talking about either of those albums for this week’s CAT, but I figured I’d go for something that went a little more under the radar when it was released in late 1977.  Plus, it’s an album I’ve just been getting in to recently, which seems to always make writing about an album a little more fun.

It seems a little weird to me that Wire’s Pink Flag is considered to be the earliest example of post-punk, when the album came out before punk had really lost any noticeable steam, but I guess that just goes to show how fast trends in music are always changing.  Wire’s aesthetic approach certainly owed much to the other punk bands of the time, as Pink Flag doesn’t feature much more than throbbing bass, pounding drums, and fuzz-drenched guitar, topped off with Colin Newman’s high-pitched shouts.  However, unlike The Sex Pistols or The Clash, there’s less of an anti-establishment feel to the songs, as the lyrics tend to be on the obscure side, and often the songs feel like the band is just trying to release pent-up emotions rather than make any sort of ideological statement.

Another thing that probably gives Pink Flag such a potent feeling has to do with the lengths of the songs, which usually clock in under a minute and a half, making for a 35-minute album featuring 21 tracks.  It adds to the immediacy of the songs, making them feel as if the intensity of the band members playing off each other is almost too intense to maintain for more than a minute or two.  However there are a few slower songs, such as the lurching “Strange”, which R.E.M. would cover on their seminal 1987 album Document.

These slower songs also point the way to the more experimental electronic influences that would make their way in to Wire’s subsequent releases, which would earn the band a reputation as one of the more adventurous bands to come out of the punk rock movement.  But on Pink Flag, it’s refreshing to hear these guys prior to their persistence on branching out artistically and just bashing out a bunch of guitar jams.