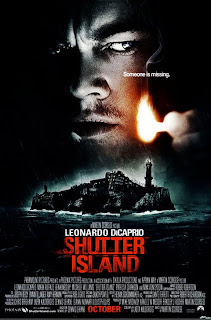 After the many delayed release dates of Martin Scorsese’s latest film Shutter Island, I was kind of wary considering most recent films that have been delayed often turn out to be somewhat disappointing. This film kind of plays into that notion in that it’s not one of Scorsese’s great films or anything, but it’s still a respectable dabbling in the psychological thriller genre for the director.
The film centers around Teddy Daniels, played with the utmost intensity by Leonardo DiCaprio, who’s been hired to find a missing inmate in a mental asylum. The set-up seems simple enough, but the film’s premise unravels in a pretty surreal way that eventually leads to a fairly shocking ending, and I don’t have any intention of spoiling it so that’s all I’ll say concerning the plot.
What Scorsese does well with this material is invoking this overwhelming tone of dread and deception while our protagonist digs himself deeper and deeper into this unsolvable mystery. The film also does a fairly good job of really delving quite vividly into the psyche of DiCaprio’s character, which is certainly something you’re not used to seeing in most detective films. However, I can’t help but feel like Scorsese gets a little carried away with the amount of flashbacks and dream sequences, which after a while kind of start to weigh the story down a bit.
I also am not sure if I was entirely convinced that Scorsese quite knew how to tell such a disjointed narrative, as it does start to feel a little sloppy and muddled towards the middle of the film. However, I found the way that the whole story is tied together in the end was ultimately satisfying, although I can’t be sure if it all makes sense after just one viewing. So maybe this is a film that could make for a more rewarding experience on a second viewing, but for now I’d say Shutter Island ranks as one of Scorsese’s interesting experiments, but certainly not among his best work.