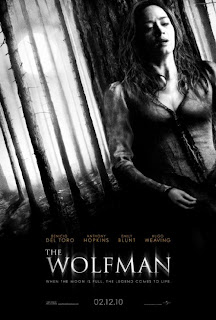 Contains Spoilers
Throughout the 30s and 40s Universal was the preeminent distributor of horror movies. Dracula, Frankenstein, The Mummy, The Invisible Man, The Wolf Man are all classics in their own right. Universal originated a great deal of the genre’s modern conventions and wrote the book on creature features. So when I heard they had plans to revisit one of their classics, I was ecstatic. A re-imagining of The Wolf Man with Benicio Del Toro and Anthony Hopkins? Makeup by Rick Baker and music by Danny Elfman? Sounds like a sure thing but instead of being the retro homage it should of been, The Wolfman (Now one word for some reason) is no more than a soulless, big budget, Hollywood misfire.

Set in Blackmoor England in the 1890s, the film opens with your typical guy wandering around at night shouting “Who’s there?” He’s of course murdered and we segue into a narrated introduction. Here we learn that this guy was Ben Talbot the brother of notable stage actor Laurence Talbot (Benicio Del Toro). Contacted and Informed by Ben’s fiancee Gwen (Emily Blunt), Laurence travels back to his long abandoned hometown to solve the mystery of his brother’s death. Staying with his eccentric father (Anthony Hopkins) of whom he has a strained relationship, Laurence is hot on the trail in no time unraveling a not so intriguing mystery.

Now I wasn’t expecting to see an exact retelling of the original story but at least something reminiscent of the 1941 classic. Where the original was simple in setup this remake over complicates everything. Does it want to be a mystery? A love story? It attempts to be both but neither are interesting or fully realized. First of all when I say mystery all I mean is the “Who killed Laurence’s brother?” fiasco. Surprisingly it’s established that everyone in this town is already convinced werewolves are real. As a matter of fact they seem to know far more than Laurence even after he becomes one. They don’t even have any doubt that he’s not a werewolf. Really the only thing holding the villagers back from taking Laurence is his dad who scares them off with a big rifle.

The love story doesn’t have much going for it either. It feels forced and I don’t know what the characters see in each other. Had any of the characters actually had you know, like personalities, interests, passions, it might have worked. Unfortunately, everyone is a blank slate that always seems to react rather than act. Laurence’s father is kind of eccentric but all Anthony Hopkin’s does is mumble his lines. I don’t even know what the point of the Inspector character (Hugo Weaving) was. Supposedly he’s investigating this whole mess but he doesn’t accomplish anything aside from observing the whole situation, he’s useless.

What’s the big plot twist that bugs me? “Who killed Laurence’s brother?” Well it’s his dad who yes, is also a wolfman. Now, this might have been interesting if they hadn’t made this painfully clear within the first twenty minutes, maybe even less. So Laurence is all pissed that his dad doesn’t mind killing people and they fight as werewolves. It’s surprisingly dull and seeing that I’ve drawn this out long enough how’s about I tell you about the few things I liked?

The makeup by the legendary Rick Baker is solid. It’s hard to compete with CGI these days but if anyone can try it’s Rick Baker. The art direction and set design are impressive as well. Old castles with overgrown vines and cobwebs. Those choices score big points. Just not enough to make up for the rest. Why this remake strayed so far from the original is beyond me. The original story is basic so why complicate things? I can only hope that the long awaited Creature from the Black Lagoon remake (whenever it’s made) won’t suffer the same fate as this.