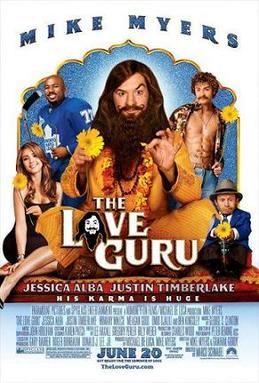 For those who don’t recognize that famous quote I used for the title, it is the inscription written on the gates of Hell from the epic poem “The Divine Comedy”. Yes, comedy, if only this film had some of that. It’s certainly been awhile since anyone has seen Mike Myers in the flesh but now I see why. The Love Guru is a mess of immature profanity, low-brow vulgarity, and disrespect for Indians (or people of any race). The Love Guru can’t help but come off as depressing, confusing, and ultimately disturbing. You’ve heard of movies where you’re told to “Leave your brain at the door” well for The Love Guru make sure you leave your soul as well because this film certainly has none to speak of.

Mike Myers plays a famous Guru hired by the owner of the Toronto Maple Leafs (Jessica Alba) to fix the relationship of their star player (Romany Malco) who’s wife has fallen for an arrogant goalie (Justin Timberlake). Alright, sounds simple enough. Yet somehow this film manages to find ways to wander in a sea of failure for a tiring 88 minutes. The jokes here are downright pitiful and more of something you might be prone to hearing from a mentally challenged child. I apologize for that last remark, but I honestly wonder if Mike has suffered brain damage because he’s lost his touch in this medium. Scenes unmercifully

Scenes drag with the impression that the makers of this film are wondering “Do you think they’ll get this? How about now? Make it longer until everyone gets the joke than cram it down their throats over and over again.” That’s the impression I got and it makes me pity the state of society…. Or at least pity the people behind this travestiy.

Can we think of anything positive here? Hmm, it’s a colorful film. I mean the sets and the costumes are all competently designed. Though when I find myself searching for pros like that, I wonder why I bother. You could argue that not all of the jokes are complete misfires.

Mike Myers various acronyms and wordplay (which make up 60% of the jokes) are worth a chuckle sometimes but that isn’t saying much. With character names like as Jacques “Le Coq” Grande (Yes, it’s pronounced Le Cock) you wonder if they’re even trying to be remotely clever. Of course, the addition of dwarf actor Verne Troyer leads to plenty of short people jokes (as if they didn’t make enough in two Austin Power films) which along with the frequent use of sexual/fecal0themed humor makes for bad cinema.

More than often I found myself searching for the punchline in a collection of bathroom humor. “Hey look, the Love Guru gets all turned on when his assistant makes food that looks like testicles!” Is he supposed to be gay or something? What century is this? “Oh, he just got punched in the nuts!” Tacking on fart jokes or sexual entendres to almost every scene they seem desperate to try anything to get audiences to laugh. The performances are basically what you’d expect from a lackluster comedy. No one is particularly interesting and Myer’s latest character “Pitka” doesn’t have a single likable quality.

Cat Fancy contributors Colin Wessman and myself saw this so you don’t have to. It’s true that we occasionally see bad films to fill out “Best/Worst film” lists at the end of the year, but also to warn others so that we can better our world. I’ll leave you with the thought of a key scene in The Love Guru where two elephants have sexual intercourse during the Stanley Cup… Is that kind of world you want to live in?