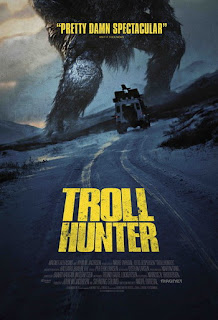 Straight from the whimsical heart of Norway I give you Scandinavia’s answer to Cloverfield with Trolljegeren aka “Troll Hunter.” Released into Norwegian theaters last October but just seeing the light of day in June here in the states, Troll Hunter (despite it’s terrible Syfy Channel sounding name.) is one of the most exciting films of the handheld camera era yet. The suspense is immense as we follow these gruesome behemoths and even learn a little bit about Norwegian folklore along the way.

The film follows a trio of student filmmakers trying to make a documentary about a supposed bear poacher in Western Norway. This “bear poacher” is one Hans, a mysteriously cold trailer-dwelling individual who enjoys his privacy. Gone almost every night into the secluded woods, the group follows Hans on one of his late night excursions only to discover that he isn’t poaching bears at all…. He’s hunting Trolls.

First of all I think anyone’s immediate gut reaction to this premise would be something around the lines of, “That sounds SO BAD.” Which is understandable, I mean how many cheesy monster movies have more or less the exact same setup? The difference is how this ridiculous concept is handled both technically and from a plotting standpoint. The acting is good, the story and mythology are highly engrossing, and the faux documentary approach makes it all feel shocking real. Not to mention that Troll Hunter is when it wants to be, pretty scary. Who would of thought a movie about trolls could of been scary?

The reason Troll Hunter is so effective is because it goes for realism. Sure there are three headed trolls being turned turned into stone by UV rays, but they are well photographed through brief glimpses and blend in well to their environment. The CGI isn’t amazing but it’s been well utilized, never being overused. They also interact very well with the cast, resulting in an exhilarating experience. Speaking of the cast, I have to tip my hat to Otto Jespersen who plays Hans the trollhunter. Hans maybe a quiet and sometimes stern character, but boy does he just embody a sheer amount of badassery, he’s great. Though what’s really interesting is that in reality Otto Jespersen is one of Norway’s most popular comedians. So how he ended up playing a dead serious trollhunter is beyond me. As much as I’d love to talk about more of the details I’m gonna leave it at here. If there’s anything else you’re curious about I highly recommend you check out Troll Hunter it’s a lot of fun.