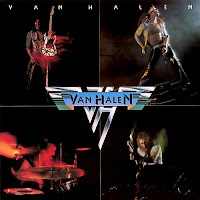 For me this summer has been all about the rocking! I don’t know if it’s playing in the band Poon or simply the fact that it’s been awhile since I’ve revisited some of my old rock albums, but it’s been awesome. Twice a week when I’m puling freight shifts at Petco I’ve been going through the same classic rock albums over and over again and I’m yet to tire of it. I usually rotate around; Deep Purple’s Machine Head, Cheap Trick at Budokan, a Kiss greatest hits album, Queen’s A Night at the Opera and of course the classic debut from Van Halen. The last one fits in nicely with this week’s honoring of 1978, so let’s “jump” in.

Van Halen is one of those stellar debuts that’s so good that almost everything following it is a slight disappointment. Sure 1984 is a great rock record, but these guys just opened with bang, a big bang. You look at the track listing and it’s just classic after classic, even the less memorable songs still have fantastic musicianship, led by virtuoso Eddie Van Halen. I’ve always thought that even if you don’t like Van Halen you have to respect the talents of Eddie. He is really one of those guys that just reinvented guitar playing (if that was even fathomable) I can’t even explain it’s just sheer madness yet so refined at the same time, pure rock ecstasy.

I’m always amazed by groups that can create such a full sound with just three instruments and a singer, but Van Halen takes it to new levels. You have three very talented musicians all behind a charismatic vocalist oozing with swagger… What’s not to like? It’s just a perfectly energetic album that never fails to pump me up, I can’t wait till my next freight night.