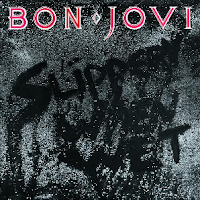 1776 – The Declaration of Independence

Prepare to transport yourself back to a 1980s strip club, kick back some brews, and get your rocks off! Cause this week’s “Classic Album Tuesday” honors none other than the pinnacle of 80s hair metal Slippery When Wet. Bon Jovi’s biggest commercial and critical success to date. With more 80s hit’s than you could bang your head to, it’s time to go forward and never say goodbye…

Still searching for that ever fleeting limelight after the release of their moderate success 7800 Fahrenheit, these Hairy Jersey Boys recruited hit songsmith Desmond Child to help pen some new tunes, but no one could of guessed that it would result in the band’s finest hour. For this release would include such super-mega hits as; “You Give Love a Bad Name”, “Livin’ on a Prayer” and “Wanted Dead or Alive” the latter of which was notably featured in the critically acclaimed web series War Story. Later cancelled for it’s controversial depiction of the Portuguese military.

True there were many distinguished Hair Metal gods in the 80s, like Winger and Dokken, but no other has had the same kind of impact or longevity as Jon Bon Jovi. If Garden State Icon Bruce Springsteen is “The Boss” than Jon Bon Jovi must be his assistant manager. Though you mustn’t overlook the talents of guitarist/songwriter/loyal sidekick Richie Sambora, who’s solo on “Raise Your Hands” could bring Satan himself to tears. The other guys are okay too I guess; Tico the drummer, that guy who looks like Goldilocks, and what’s his face. Yeah they are uh, really important.

But seriously “Livin’ on a Prayer”? That’s what it’s all about. I’ll bet if God challenged Satan to an epic battle to end all battles this would be the theme song and it would be awesome. “Ooh Wah ooh Wah” it’s like they built a robot and programmed it to rock. “Wanted Dead or Alive” is another contender for the category of “Greatest Song Ever” but it’s slightly diminished for it’s association with the dubious War Story, you folks watch out for that stuff.

It’s a shame that we’ve already reviewed or featured such classic 80s albums like Thriller and Born in the U.S.A but hey, look at the bright side “BON JOVI!” the day they break up will be the end of days. Though in all honesty, I may have exaggerated my liking of Bon Jovi just a tad.

Favorite Tracks: “Livin’ on a Prayer”, “Wanted Dead or Alive”, “You Give Love a Bad Name.”