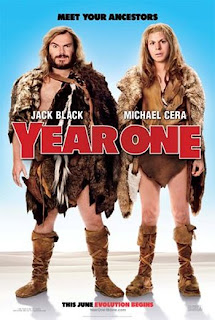 Harold Ramis directing Jack Black in a Biblical comedy? Sounds like a formula for success yet there’s very little to laugh about with this tired collection of dare I say… Prehistoric jokes. Directed and co-written by Harold Ramis known for such comedies as Caddyshack and Groundhog Day, Year One appears to be an indication that his best years are behind him.

The film follows misfits Zed (Jack Black) and Oh (Michael Cera) after they are kicked out of their tribe and set out to find bigger and better things. Something that throws me off right off the bat is that there cavemen. I thought this was supposed to be biblical times? Did these two kinds of societies really coexist in the same setting or era? I guess they thought that putting a caveman spin on this would be funny… They were wrong. Another thing is if this is supposed to be a biblical comedy then where’s all the satire on religion? It’s like they include characters like Cain and Abel but they have no idea what to do with them they’re just there. Then you have Abraham who’s just obsessed with cutting foreskin and that’s it. I mean they couldn’t of done more research or included more biblical references? There’s hardly enough here to call this a “biblical comedy” the whole setting is just ripe for parody but I suppose they’re more interested in fart jokes.

So what’s there to like? Well I’m a big Jack Black fan and he as usual brings a great deal of enthusiasm. Not to mention Michael Cera’s typical nervous teenager shtick is always good for a chuckle. Oliver Platt is also a standout as the overly flamboyant high priest but I’d say that’s about it. Why great comedic talents like Paul Rudd and Bill Hader are wasted in this crap I have no idea. Most of the cast appears to do their best with the material but this film just can’t be saved. For the most part I blame the bad script. Not only does the story have no idea where it’s going but scenes seem to be set up for no real purpose. For instance there are at least two sequences where Michael Cera is pitted against a deadly animal (one time a snake and another a cougar) and then the movie just cuts ahead before we see how he escaped from the sticky situation. If I learned anything from screenwriting classes, it’s that a scene must serve a purpose “To move the story ahead”, so what were they thinking? They weren’t because this movie is just about as clever as my post title.