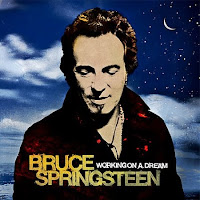 Bruce Springsteen – Working On A Dream

Sorry I took so long to post this conclusion to my in-depth retrospectus of Bruce Springsteen. Anyways, Working on a Dream marks the third entry in a supposed trilogy of albums, along with “The Rising” and “Magic” that reteams Bruce Springsteen with the E Street Band and producer Brendan O’Brien. It could very well be the best of these albums, but one thing that’s for sure is that it’s another very impressive outing from a man who’s giving us an exciting career with no end in sight.

The album starts off with the 8-minute “Lonesome Pete”, and proves to be one of The Boss’s most epic songs in years thanks to some sweeping instrumental work. The rest of the album however, shows Springsteen in a more optimistic state. There are a surprising number of simple but nonetheless charming love songs like “What Love Can Do” and “Tomorrow Never Knows”. A lot of the songs such as “This Life” and “Working On A Dream”, are fairly laid back, but their soaring melodies and lush arrangements make Working On A Dream one of the Boss’s most accessible albums yet.

If The Rising offered messages of strength and healing in the face of a post-9/11 world and Magic was a meditation on the waning days of the Bush administration, then Working On A Dream definitely appears reflect Bruce Springsteen’s hopeful attitude towards our new President. And of course Bruce’s brilliant contribution to The Wrestler soundtrack embodies that film and is a nice addition to this great collection of songs that explore the poppier side of one of rock’s greatest talents.