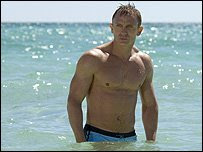 Sorry if I sounded really pissed off in my post on Sean’s Bond post, but I really can’t say I agree with the point he was trying to make.  I mean we all agree that the newer Batman movies were able to reinvigorate that franchise tremendously, and I think Casino Royale, though it certainly wasn’t nearly as great as Batman Begins or The Dark Knight, was what the Bond movies needed.  I just watched Die Another Day, which I didn’t see in theaters, and for me it’s basically the equivalent of the Joel Schumacher Batman movies.  It’s so cheesy and over the top, I mean come on, how can you take any scenes seriously that take place in an ice palace.  And all the cheesy one liners after someone gets killed, they just seem really lame and uninspired, not to mention Bond’s invisible car and the scene of him surfing down a tidle wave created by an avalanche. Everything about it just seems really tired and dated, so I think it was time that there was a new Bond with different sensibilities for this day and age.

And as for Daniel Craig, I can’t say I fell in love with him, but I think he’s a suitable Bond.  I think he shared a lot of the qualities that made Sean Connery’s Bond so great, rather than trying to charm his way through the role in the way that Roger Moore and Pierce Brosnan did.  And sure I can understand that there could be certain qualities that you could expect from James Bond if you’re a big fan, but do you really want to see the same interpretation of Bond every time?  One thing I liked about Casino Royale is that it focused on him as a character with flaws and desires rather than just putting him in one crazy action sequence after another.
Anyways I’ve gone way too far to defend a movie and franchise that I only have a somewhat above average appreciation for.  I just wasn’t feelin’ all this hatred towards the new James Bond movie. But whatever, it’s been a while since I’ve posted.