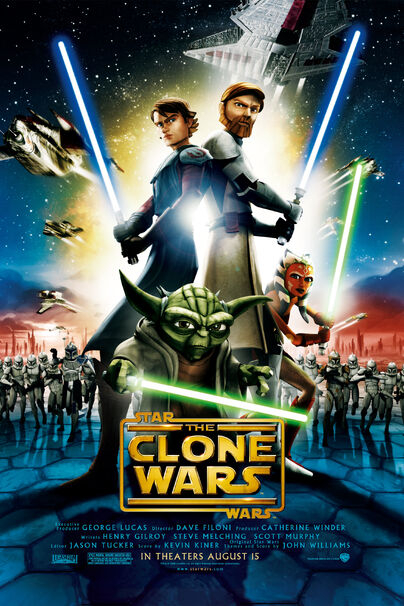 Ugh. Clone Wars is the latest installment to the Star Wars saga from our good friend Executive douche bag George Lucas. Taking place in between episodes II and III, Clone Wars starts off with our heroes in the heat of battle. A new character to the franchise is introduced when Ahsoka Tano, a young padawan learner, is sent by Yoda to relay the message that some shit is going down on Coruscant. Through a hilarious mix up, Ahsoka becomes Anakins apprentice. Much hilarity ensues.

Later, it is revealed that Jabba the Hutt’s son has been kidnapped by the Separatists, and in order to gain the Hutt’s trust so that the republic will have control over trade routes in the outer rim, they send Obiwan, Anakin, and that dumb bitch out to recover Jabba’s son.

Lets start from the beginning. Let me take you in the mind of a person that just spent $7.50 to witness an abomination to all things holy. First you see the Lucas Film logo and you’re like, “Awesome?”. Then you see the A long time ago in a galaxy far far away… Next the Clone Wars logo scales up in a recognizable fashion, but to a dismal arrangement of the Star Wars theme. The suckitude at first is like, well it is Warner Bro.’s, I am sure they could not get the rights and so on and so forth. So right from the start, it is bad, but not unbearable. Then…

BAM! It hits you. Right in the face. A big piece of shit. Instead of the a regular panning up of glorius plot, you get this stupid stupid stupid stupid stupid stupid narrator describing the events taking place during the clone wars. I could not have been more pissed. I think I said “What the fuck,” just a little too loud, being that Sean, Kevin, and I were the oldest people in the theater, besides the elderly couple who were there without any little kids. This troubled me greatly.

On to the characters. Ahsoka is so dumb. They could have made her not so dumb, but they insisted on making her very dumb. That is about as simple as I can put it. And it’s not just her. Basically everyone is dumb. Obiwan, Anakin, the writers, the old people. Everyone. The writing was so bad, it made the prequel trilogy seem like a Shakespearean masterpiece. Every character after every line had some witty retort. Regardless whether it was funny, timely, or even made sense at all, they were there. And the nick names. R-Tooey, Snips, Sky-Guy, and Stinky, just to name a few. Sean and I agree that Sky-Guy is the one that hurts the most, but I feel that R-Tooey is a close second. Though I do commend the writers for dropping a much needed D-Bomb in the middle of this mess.

I thought the movie looked great. The action scenes were great and didn’t stretch too far from what was in the prequel trilogy because all of the CGI. The problem with the visual aspect of the movie came when there was close ups. Which was about two thirds of the movie. The faces looked like inanimate wood carvings and the dialogue looked no better than Team America. Which I guess they were going for, which I do not understand either.

With all the talented people in the world, it is a shame that something this bad was made from material that so many people love. I really think they could of made something at least worthwhile.