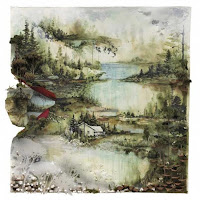 Prior to checking out Bon Iver’s self-titled album, I didn’t know a whole lot about this band besides that the first Bon Iver album was record by a bearded dude alone in a Wisconsin cabin, and that said bearded dude went on to appear on Kanye West’s last album.  Well after giving Bon Iver a few listens, my interest in what is basically Justin Vernon’s solo project has deepened, though I’m not gonna say this album is profoundly unique or anything.

Bon Iver’s first album was a pretty spare sounding piece of melancholy folk, with Vernon’s high whisper of a voice and his unique use of harmonies being the most striking part of the production.  On this self-titled second album, Vernon’s unique voice is still used to great effect and is what really gives the album its striking beauty.  As far as the production, the songs have a much richer sound, as there’s occasional synths and horns that give the album a sound that sometimes suggests ’80s R&B.  Still, Vernon doesn’t get too carried away with the album’s sonic richness.  In the end this is a folk album, and there’s still a nice amount of intimacy to these songs despite the occasional foray into bolder and bigger sounds.

So basically I don’t have a whole lot to say this album other than that it’s very pretty.  The songs aren’t exactly ones that jump out at you and leave you humming them for hours, but when it’s so easy to get rapped up in the beauty and the atmosphere of the songs, it doesn’t really matter.  Also, much like The Antlers’ latest album, it’s a little too downbeat to be a good “summer album”, but once we begin the slow descent towards winter, Bon Iver should feel just right.