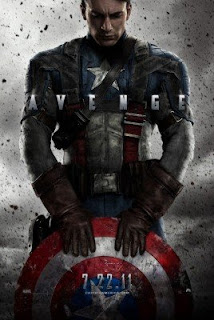 With the final Avengers piece in place it’s only a matter of time before we’ll all be watching the most hyped superhero movie of all time. So last but not least we have ol’ red, white, and blue Captain America in a slick WWII era action flick. Originally created in 1941 by Joe Simon and Marvel icon Jack Kirby, it’s been a long wait for Cap to finally get a decent adaptation on the big screen. There were some serials, a few made for TV things, and even a bizarre 90s flick starring J.D. Salinger’s son… But now all of those can be forgotten because we a finally have an adaptation worthy of Uncle Sam’s favorite son.

Cap’s origin is as typical as any superhero origin. We have an ordinary man who receives extraordinary powers, in this case through a scientific experiment, and then becomes symbol of justice. Chris Evans stars as both the scrawny and brawny versions of super patriot Steve Rogers who simply wants to do his country proud. The early half of the film is stunning in how FX wizards have somehow managed to shrink and whittle down Evans to the shrimpy pre-op Rogers and even after this half there’s enough humor, and action to firmly hold my interest. Evans is pitch perfect as the brave yet naive title hero and is in good company with seasoned veterans like Tommy Lee Jones as stern military superior and Hugo Weaving as the film’s menacing antagonist Red Skull. The action doesn’t rely too heavily on CGI due to it’s setting in time, but even scenes heavy with effects are very well polished.

Back when they originally announced an Avengers movie I became a little worried that all the films leading up to it we be quickly dished out with little care but to make a buck. Now I’m glad to say that this was not the case and Marvel has truly delivered on a solid series of solo superhero flicks. Captain America like Thor is a well made action film with great stars, visuals, and humor and the strength to act as a standalone film. Really my only problem here is that this film is so firmly connected with the upcoming Avengers flick. I look forward to The Avengers but I’m pretty tired of it tagging along to the end of all these movies, can’t they just end without Samuel L. Jackson showing up? He’s cool I guess, but I’m here to see Cap, why must we cut into his time? This should be Cap’s moment in the sun yet they have to keep constantly reminding us of The Avengers. It’s not a big deal but it’s a little annoying, that flick better be damn good.