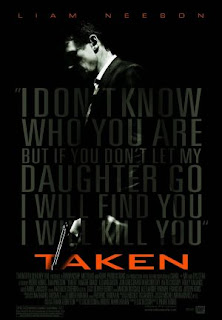 So why and in what form did I see Taken? Well it goes a little something like this. So my step dad is a customer of a European movie site. So he pays money, downloads the movies onto his laptop, and hooks it up to the TV. Now Taken came out in Europe almost a year ago, therefore it was in the sites inventory. I must warn all readers that if you are interested in seeing the film yourself then don’t read this, because this includes some spoilers regarding the plot.

The trailers for Taken didn’t reveal much. We know that Liam Neeson is some guy with a “particular set of skills” who’s daughter is kidnapped so he goes all Jack Bauer on everybody. I was afraid that the movie would have some really lame excuse as to why these events are set in motion, but actually it’s a compelling set up. Liam Neeson plays divorced, ex-CIA agent, Bryan Mills who now does security work. Sharing a somewhat strained relationship with his daughter Kim (Maggie Grace) and bitch ex-wife (Famke Janssen), Bryan is hesitant about letting his 17 year old daughter take a vacation in Paris. Then everyone’s like “Your such an asshole Bryan!” So he goes ahead and signs his daughter’s parent permission pass thing.

Kim arrives in Paris with her friend and quickly meets a handsome European stranger at the airport. Soon enough we discover that this stranger is bad news. He then brings a group of men to the girl’s apartment where they are “taken”. Luckily, Kim calls her dad right before and tells him what she can and that’s when shit gets real. Bryan (who taped the phone call) quickly contacts his CIA buddy and finds out these man are Albanian sex traffickers. I was surprised to see what looked like a dumb action flick tackle a subject that’s actually a relevant issue. I was afraid that the movie would be some complicated political thriller, but it was never complicated and was always thrilling.

After all this set up the rest of the movie is just Liam Neeson committing a lot of murders. It’s kind of ridiculous how many people he kills, sometimes for no reason, he’s just pissed. Cars explode, guys get electrocuted, Liam Neeson gets shot at a million times but doesn’t die, it’s awesome!

Of course you’ll be sitting through this movie saying, “Where are all the cops?” and I’ll admit it is absolutely ridiculous, but that’s just action movies for you. Fortunately, it ends on a good note, no strange or stupid twists. Liam Neeson set out to get shit done and that’s what he does, so I liked it.